Quartzite is a metamorphic rock formed when quartz-rich sandstone or chert has been exposed to high temperatures and pressures. Such conditions fuse the quartz grains forming a dense, hard, equigranular rock.

The name quartzite implies not only a high degree of induration (hardness) but also a high quartz content.

Quartzite generally comprises greater than 90% percent quartz, and some examples, containing up to 99% quartz, and are the largest and purest concentrations of silica in the Earth's crust.

Although a quartz-rich sandstone can look similar to quartzite, a freshly broken surface of quartzite will show breakage across quartz grains, whereas the sandstone will break around quartz grains.

Quartzite also tends to have a sugary appearance and glassy luster. The variety of colors displayed by quartzite are a consequence of minor amounts of impurities being incorporated with the quartz during metamorphism. 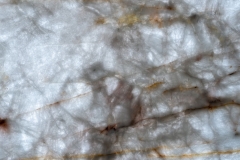 Only in-person can you experience the real true colors of Natural Stones. Come visit us!